To all our friends back in the mother country, we here at DESTRUCTIBLE MAN want to hoist our hearty grogs, chuck our favorite “Guy” onto the fire and wish you all a high and HAPPY GUY FAWKES DAY! 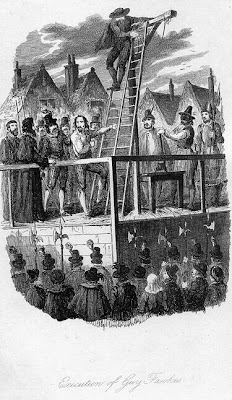 To properly celebrate, we have selected a few choice moments from John Brahm’s masterpiece of melancholy, HANGOVER SQUARE, to kick off the first in our series that will occasionally examine a very special form of dummy: EFFIGY. 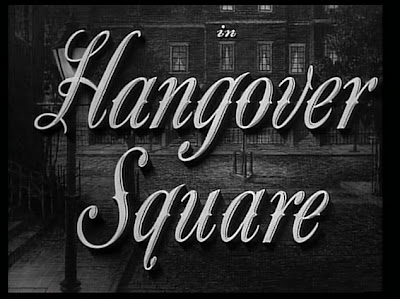 And those too lazy to use Wikipedia may ask, “Who is Guy Fawkes?”


Laird Cregar plays George Harvey Bone, a sensitive composer and concert pianist who falls victim to spells under which he fulfills a compulsion to kill. 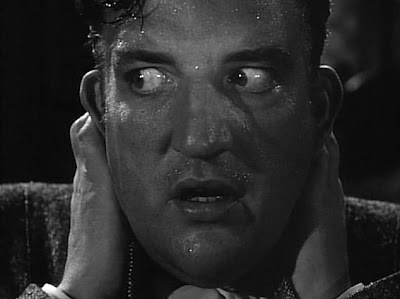 The film begins with a dummy-death.

Bone, already under the grip of a psychopathic spell soon after the opening frames, stabs an antique dealer to death. 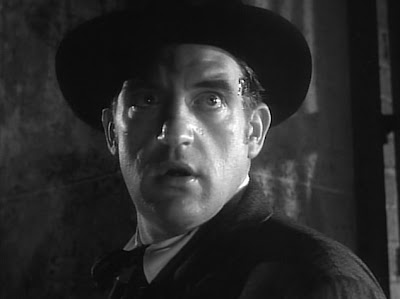 He then proceeds to smash an oil lamp over the dead body -- actually, now a substituted dummy body instead of the actor Francis Ford (director John Ford’s older brother) -- 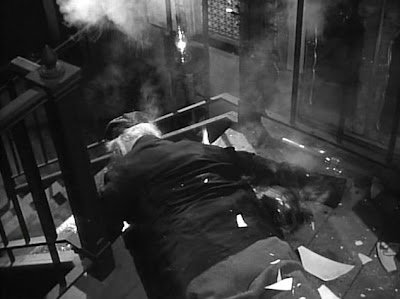 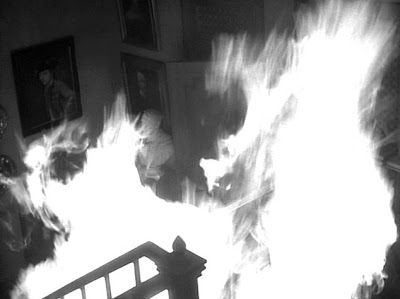 Immolation is the preferred mode of body disposal in this film. 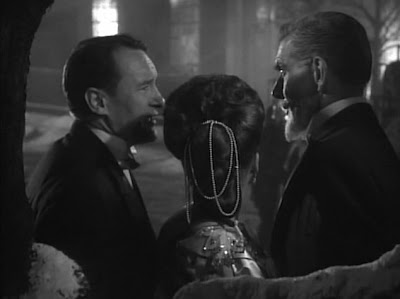 Even George Sanders, the dashing young hero, proclaims, “It’s better this way” instead of trying to rescue poor crazy Cregar from the burning music hall at the film’s climax. 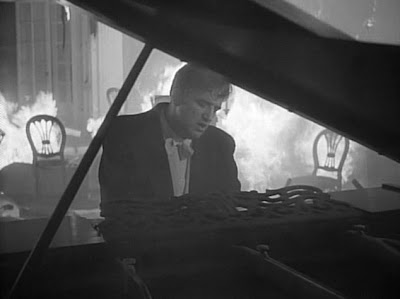 He certainly had no problem darting through the flames when he ushered lovely heroine Faye Marlowe away from Cregar’s side moments before. 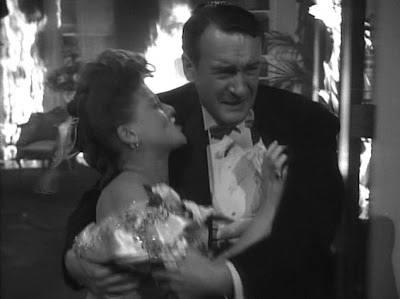 In HANGOVER SQUARE, fire is a convenient means of eliminating inconveniences -- historically, literally and metaphorically. 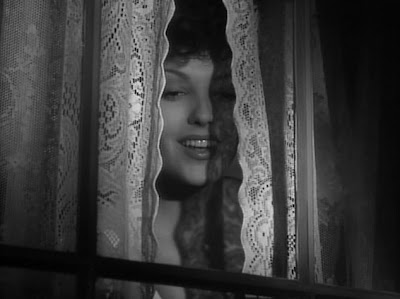 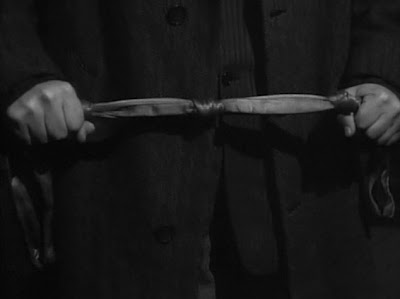 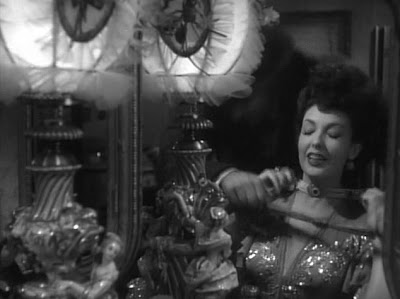 The disposal of strangled music hall singer/strumpet (and obsessive object of Bone’s frustrated affections) Linda Darnell’s shapely carcass proves to be one of the creepiest sequences in 20th Century mainstream cinema.

Bone carries her body, disguised as a “Guy” effigy -- and places her atop the symbolic Guy Fawkes Day celebratory pyre at the center of the Square -- 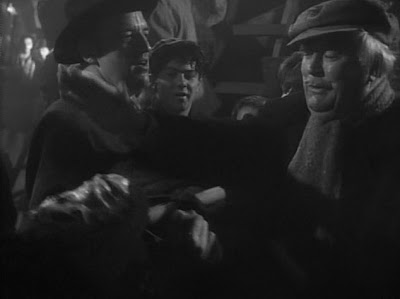 -- left anonymously amidst hundreds of other effigies. 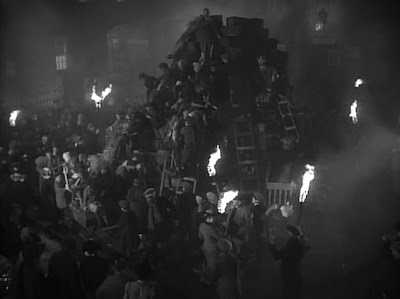 At first it is clearly the actress in his arms -- 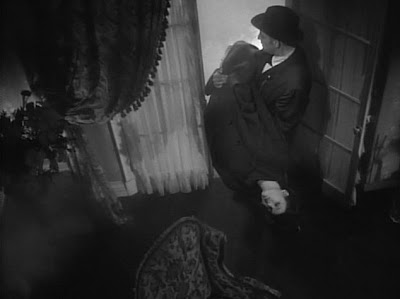 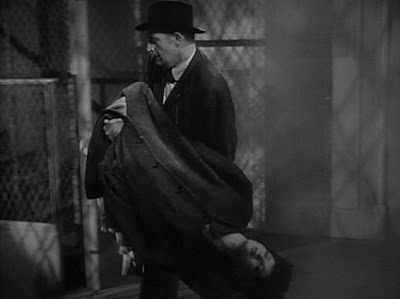 -- but as soon as Bone is on the streets, the body is wrapped and masked (now a dummy as well?). 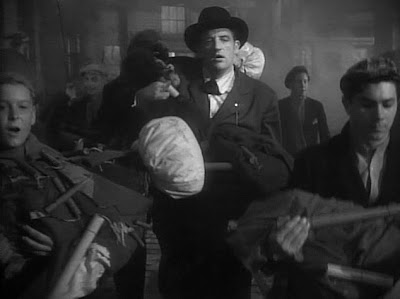 That transformation that can only happen in the realm of meta-ciné has taken place in the space of a single edit.

One last thoughtful touch -- images both chilling and poetic: 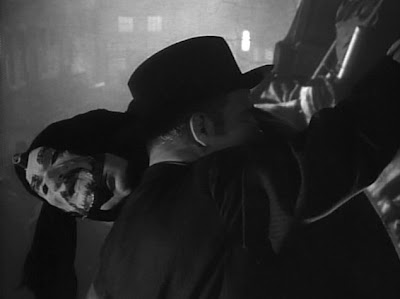 A woman caught between the world of the living/the dead/the fantastic. 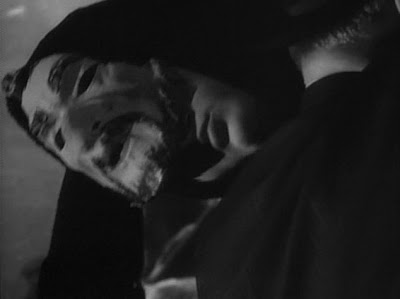 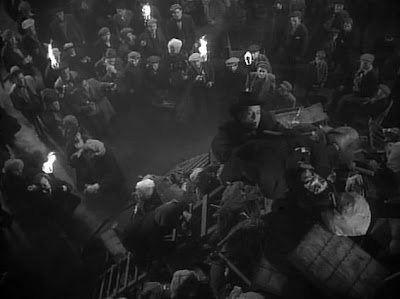 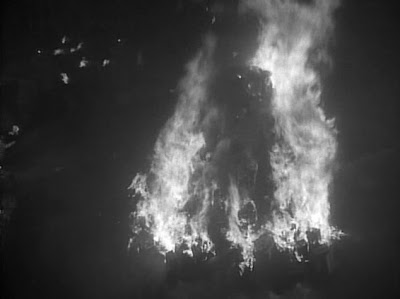 Posted by The Flying Maciste Brothers at 6:20 PM

I so want that on a tee shirt.