-- and the stunted lives that play out within it in Shoei Imamura's "Intentions of Murder".

In his scathing portrait of Japan's suffocating, traditional, male dominated society, an unlikely hero emerges in the character of Sadako Takahashi (Masumi Harukawa) --

-- a (illegitimate) housewife who is treated more like livestock by her stunted, infantile common-law husband Riichi (Kô Nishimura) --

-- a second, potentially more dangerous threat is forming behind her back --

-- as her philandering husband's librarian co-worker and mistress, Yoshiko (Yûko Kusunoki), attempts to escalate her adulterous affair with Riichi --

-- and dislodge Sadako with the intent of replacing her at Riichi's side as his new wife.

Sadako is a product of her demeaning, abusive upbringing.

Eternally blamed for sexual indiscretions of a grandmother she never knew --

-- and the "family curse" that is believed to have grown from these indiscretions.

This makes her urge for liberation from Riichi primal and instinctive.

An urge that at first disturbs and disorients her --

-- leaving her emotionally vulnerable to the destructive affair she pursues with her volatile, sickly, rapist Hiraoko (Shigeru Tsuyuguchi).

On the other hand, Yoshiko's affair with Riichi is a calculated pursuit of reactionary stasis.

She is seeking smaller cage confinement in a throwback, traditional (and legitimate), subservient relationship with Sadako's husband.

-- willingly burying herself alive in the deep grave of her country's cultural past.

-- but on inanimate objects as well --

-- such as when a spirit (Sadako believes it to be her father) inhabits a shirt, sending it dancing through the air in the family's yard.

The incident acts as a reminder that perhaps Sadako was not the only witness to the "shame" of her rape (and as a palpable foreshadowing of the use of the "fantastic" later in the film, as in the impending, transformative manekin hakai at the film's climax).

Sadako then reasons to kill herself --

-- but her plans are repeatedly foiled.

Sadako's grade-school age son, Masaru, is, unfortunately, caught in the middle of this harrowing, domestic nightmare --

-- and regurgitates them in violent, modern, expressionistic doodles that contrast sharply with the traditional, meditative Japanese ink drawings that adorn the screens of the family's home --

-- and hint at further abstractions of reality to come.

Ironically, the one thing that Sadako creates --

-- clothing -- is ever imbued with life (as witnessed in the sequence with the flying shirt).

-- trapped in their tiny cage and running endlessly, while getting nowhere, on their steel exercise wheel.

Here, Sadako is the smaller mouse that eventually devours the bigger mouse, meant to represent Yoshiko --

-- and, in a further bit of foreshadowing, leaves it a hollow, empty husk.

Two-fold, it perhaps insinuates that Sadako is the plumper mouse, shelled-out by Riichi and his family.

The two women are also associated with two types of worms --

-- and Yoshiko with the sinewy, destructive, burrowing bookworm.

As a librarian, she is a figurative "bookworm" who actually covets the cloistered, suffocating life Sadako is so desperately trying to escape.

-- the other is a pest that is unceremoniously exterminated...

-- both literal and metaphoric--

-- mirrored in the single reflex lens of her camera.

As she gathers incriminating, photographic evidence of Sadako's infidelity --

-- Yoshiko remains blind to the much more immediate, impending reality bearing down behind her.

As a 20th century Japanese woman looking backward, but capable of seeing nothing, while seeking entry into a vacant life of empty tradition; Yoshiko has allowed herself to be transformed into nothing more than a piece of shattered, soulless feminine statuary. 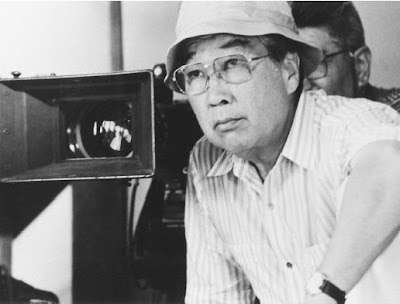 Is it just me, or does the landing of the shoe almost perfectly straight up in the foreground just make that shot perfect?

Great review of what sounds like such a provocative film. Some astounding images too! Keep up the good work. :)

That was great! Scrolling down quickly was like using a flip book. I haven't seen anyone do that before. Very cool way to post.