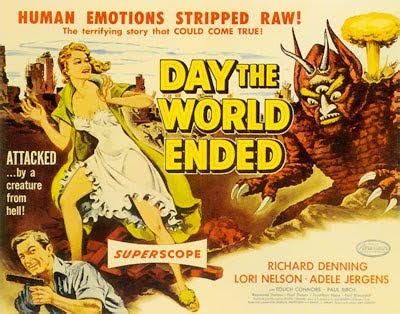 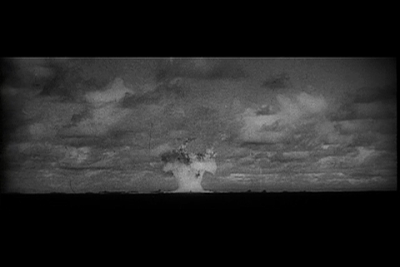 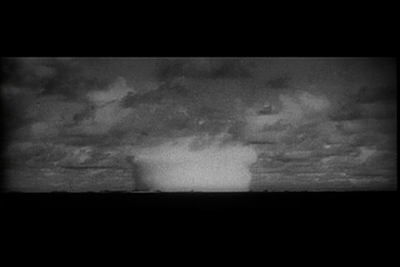 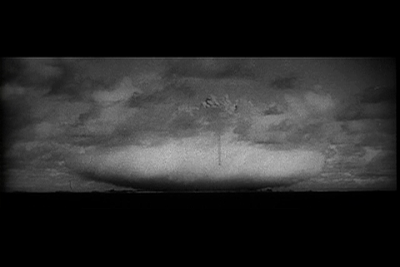 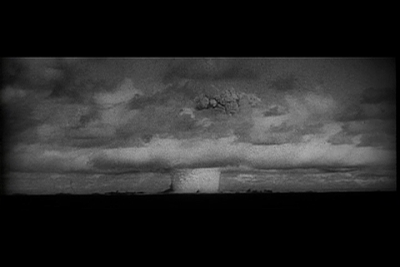 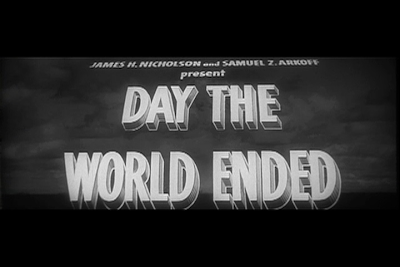 -- the film's farsighted Noah who has constructed an "ark" in the form of a radiation-proof compound in the valley of a lead-impregnated mountain range.

-- a radioactive wasteland in which demons, in the form of rampaging mutated monsters, rule unopposed.

-- will hint at that impending metaphysical abstraction early in the narrative by representing characters and creatures as all manner and forms of facsimilia: drawings, statuary, reflections and shadow.

An arena where the last vestiges of humanity are thrown back into the evolutionary ring to battle it out with their physically altered, better-adapted counterparts.

Corman's "Eden" and "Hell" are separated by a foggy no man's land through which both human and mutant figures pass, emerging and disappearing mysteriously in its folds.

These undulating borders not only represent the new, arbitrary boundaries between good and evil/human and mutant but also the one between moral --

As conflicts among the human survivors intensify --

-- and those who are trapped in their "sinful", irrational, obsolete patterns of behavior. This spiritual imprisonment is one of the assigned "seven deadly sins" that shackles each individual survivor to his/her earthly corporeal form. But when attempts are made to redeem and release oneself from that bondage, the metaphysical transformation is immediate and profound, such as this early instance when Rick (Richard Denning) fights Tony (Mike "Touch" Connors) over "control" of the group.

A physical transformation of intellectual argument -- democratic action vs. fascistic action -- into a battle of desperate violent force occurs.

A transformation made metaphysical by the substitution of stuntman for actor as the contest between "good" vs. "evil" reaches an hysterical pitch.

Several borderline characters function well on both sides of the film's world, divided by the smokey barrier separating the compound from the wasteland.

However, prospector Pete's single-minded pursuit of gold, wherever he can find it --

-- blinds him to the danger around him.

His home-made white lightning doesn't help his perception of reality either.

-- is similarly indifferent to the cataclysm unfolding around them.

Pete (Raymond Hatton) pays for his greed when he finds out (the hard way) that, amongst humans, he might be seen as a quaint old codger --

-- but among the mutants, he is just a tasty rack of ribs with a side of slaw.

His transformation from actor/character to post-picnic compost occurs, ominously, off-screen leaving the audience to imagine what the process of his transformation into denuded skeleton must have resembled. This encounter between human and mutant does not bode well for the future of the remaining human survivors.

A "taste" of what fate awaits prospector Pete and friends if they don't change their sinful ways!

Radek is another transitional figure --

-- a "Stage One" mutant with a foot firmly planted in each of the film's two opposing worlds, even as he contains within himself both mutant and human characteristics.

Not entirely welcome in either place, he proves to be a kind of room-mate from hell --

-- drifting in and out of the compound at all hours as he ruminates over his plight as a neither/nor in a world transformed into a nothing that used to be.

Of course this "Eden" would be pointless without an "Eve" --

-- a hot commodity in this barren new world --

-- who is pursued by every fertile male --

-- within a hundred miles of the compound.

Here, the "Devil" has designs, not on Louise's purity, but on her uterus -- an organ that will be the cradle of any future civilization whether human or radioactive hybrid.

Instead of disguising himself as a serpent, the Stage Four "Devil" gets inside the protected perimeter telepathically --

-- insidiously disguising himself as Louises' own thoughts and feelings in an attempt to coax her away from the safety of the valley for the purpose of propagating a new, hybrid, mutant/human species (in the form of creature-creator Paul Blaisdell's awesome final stage mutant).

Hidden in the film's narrative is an implied critique of America's hollow, pre-Armaggeddon, consumer and commodities driven society, personified with the characters of Tony Lamont (a shady gangster type) and his moll Ruby (a showgirl and nightclub singer).

This leaves Ruby (actress Adele Jergens) out in the cold of her own, private, nuclear winter.

Dropped by Tony (and past her childbearing years), this personal disaster has exposed the facile nature of her character and the society at large that her character represents -- an America that may have lost its soul in all its prosperity.

Still dressed in an evening gown and pumps and unable to apply her skills as a night club entertainer to the group's battle for survival, she retreats into memories of her spot-lit glories and entertains a persistent delusion that she and Tony will be together again.

With life's priorities abruptly and dramatically rearranged, Tony becomes increasingly enraged with Ruby's interference in his new set of plans.

Ruby makes the fatal mistake of pressing her case on an isolated bluff in the wasteland; away from the capable protection of the sane, if small, civil society back at the compound.

Having spent her life transforming herself into a commodity for consumption by a society based on leisure and indulgence, Ruby faces the fate of all disposable items of cultural ephemera -- an ignoble, cruel toss onto the trash heap. 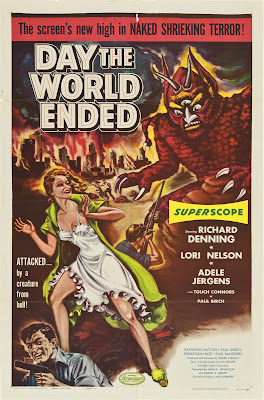 The Vicar of VHS said...

Great stuff! And that is indeed an awesome dummy toss. :)

You guys rule/welcome back! You were missed.

I am one of those viewers who interprets the final stage mutant (your "Devil") as Lori Nelson's missing fiancé (that framed photo she keeps).
Tying in with your analysis, the "Devil" is also part of the past--the pre-nuke world that was so corrupt and stupid that it brought nuclear annihilation upon itself.

Thanks, boys! Nice to be back and Happy Halloween to all!

Ivan -- yes, of course -- a series of metacinematical transformations implicit in that as well -- and if you look closely, just who is that handsome "devil" in her prized picture? -- Roger Corman himself!
We will amend the post to include this omission! Many thanks!

I'd like to see the deleted scene where Paul Birch's character is setting up the radiation proof shelter and makes the design decision to hang the masks of comedy and tragedy. How could that not turn into an ironic comment? As a scientist, he should have seen that coming.

Considering Mannix's wooden acting, that might be the first time you had profiled one mannequin tossing another mannequin off a cliff.

Glad to see y'all back in action.

jeez, you guys are hardcore!...